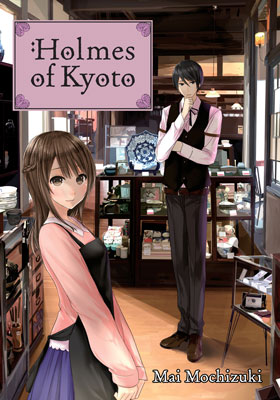 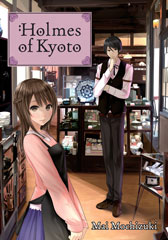 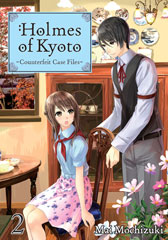 High school girl Aoi Mashiro has begun her part-time job at the antique store Kura in Kyoto’s Teramachi-Sanjo shopping district. There, she works with the store owner’s grandson, Kiyotaka Yagashira. Kiyotaka is a young Kyoto man with a gentle demeanor—as well as a fearsome intuition and a bit of a wicked streak. One day, a first-time visitor brings a tea bowl for Kiyotaka to appraise. Kiyotaka immediately identifies it as a fake. Then he and Aoi encounter a priest who introduces himself as Ensho. This man turns out to be an extraordinary counterfeiter. The mysteries continue in Volume 2 of Holmes in Kyoto! 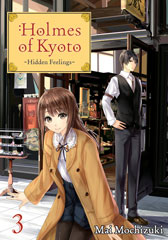 It’s November and winter is just around the corner. Aoi Mashiro continues to work at the antique store Kura in Kyoto’s Teramachi-Sanjo shopping district, alongside the owner’s grandson, Kiyotaka Yagashira. Nicknamed “Holmes,” he’s a young Kyoto man with a bit of a wicked streak. One day they’re visited by a famous kabuki actor named Kisuke Ichikata. Minamiza Theatre’s annual grand show is coming up in December and Kisuke has received a threatening letter. The next day, Kiyotaka and Aoi go to watch him on stage, where he suffers a serious injury. Unrequited love, illicit affairs, hidden feelings—the mysteries continue through Christmas and New Year’s in Volume 3 of Holmes of Kyoto! 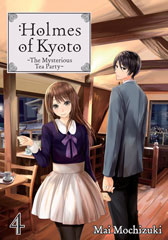 Kyoto bustles with the arrival of the New Year and Aoi Mashiro continues to work at the antique store Kura in the Teramachi-Sanjo shopping district, alongside the owner’s grandson, Kiyotaka Yagashira. On Valentine’s Day, the two of them are invited to a storytelling session at the Yoshida-Sanso Inn, hosted by the popular mystery author Kurisu Aigasa. There they find out that someone tried to murder her three months ago, and her sister asks Kiyotaka to find the culprit. 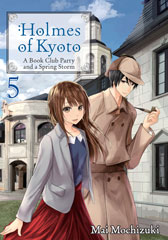 It’s been a year since Aoi started working at Kura, and now spring break is full of excitement: a hot springs trip with Kiyotaka and Akihito, a book club party, and more! But at the same time, she is struggling to decide whether to tell Kiyotaka how she feels about him. One day, an editor shows up at Kura under the pretense of doing an interview for a magazine. Then, in the middle of the night, the master forger Ensho steals a Shino tea bowl from right under Kiyotaka’s nose. The next morning a written challenge from Ensho arrives—the mysteries continue in Volume 5 of Holmes in Kyoto! 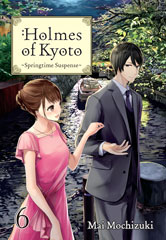 Kiyotaka and Aoi have finally confessed their feelings for each other and are now dating. One day, they learn of a string of thefts in Kyoto: someone is stealing Buddhist works of art from art collectors. Then Komatsu, the detective they met at Yoshida-Sanso Inn, comes to Kura to ask for help finding his missing daughter. The two cases turn out to be intertwined... 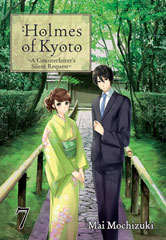 Aoi is now in her third year of high school, with entrance exams looming on the horizon. She and Kiyotaka are slowly and clumsily growing closer, but one day, Ensho—Kiyotaka’s nemesis—shows up and asks him to appraise a white porcelain incense holder. However, when Kiyotaka claims that it’s real, the counterfeiter denies it and leaves in an attempt to discredit him. Some time later, Aoi is approached by Ensho after school. Kiyotaka arrives just in time to save her, but then he breaks up with her, sending her into the depths of despair. Two months later, Aoi receives a phone call from the manager. “Kiyotaka came back from Hyogo,” he says. What will become of the two now? 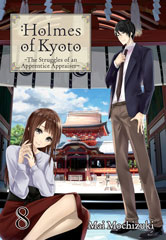 Aoi has graduated from high school and successfully enrolled in her top pick, Kyoto Prefectural University. Kiyotaka has completed grad school too, and their relationship can finally deepen—or so they thought, but the owner orders Kiyotaka to learn more about the world by working outside of Kyoto! His first placement is at Shokado Garden Art Museum in Yawata City. One weekend, Aoi and Kaori secretly pay his workplace a visit to see how he’s faring, but as it turns out, an unexpected incident is awaiting them there! 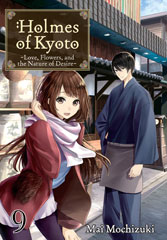 It’s January, and Aoi has settled into her life at university. Meanwhile, Kiyotaka is training at Kotani Brewery, a longstanding sake brewery in Fushimi, Kyoto. But even though they aren’t far apart, Aoi hasn’t had a chance to see him yet. She has, however, been helping out the flower arranging club that her best friend Kaori is part of. Things seem quiet until the club leader, Ikumi, declares that she’s quitting, while over at Kotani Brewery, a family heirloom goes missing. Behind both of these events lie painful emotions that soon come to light. Then, Kiyotaka and Akihito join forces in a revenge play set in Hirakata Park! 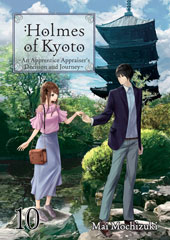 It’s May in Aoi’s second year of university, and to celebrate her twentieth birthday, she and Kiyotaka take a trip to Kyushu on an extravagant overnight train. As they’re enjoying their vacation on rails, they run into Shiro Amamiya, one of the people involved with the drug cult in Ohara. He has two stolen hanging scrolls on him, which were supposed to have been sold at an overseas auction! In order to reclaim their friend’s paintings, Aoi and Kiyotaka find themselves taking on a new investigation. The mysteries continue in Holmes of Kyoto: Volume 10! 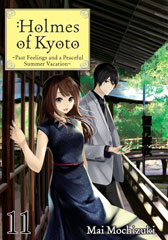 It’s Aoi’s second summer as a university student, and Kiyotaka has earned a short vacation before his next term after completing his training at Daimaru Kyoto. He decides to spend it at Kura, meaning the couple finally gets to work together again. During their time at the store, they’re visited by an old classmate of Kiyotaka who recently quit his job. Kiyotaka takes him to Eikan-do Temple, which is famous for its fall foliage. It seems like a strange destination for the middle of summer, but turns out there’s a good reason for it. And on top of everything else, Ensho’s past is revealed! 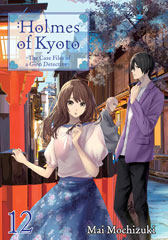 It’s September, and summer break is now over. The last part of Kiyotaka’s training brings him to Komatsu’s detective agency, where everyone is surprised to find that his partner will be his longtime nemesis, Ensho. Their first request is a strange one: a client wants to know who “killed” him. Meanwhile in Gion, a geisha is being stalked and ghost sightings are on the rise. These curious mysteries have the troubling trio—Komatsu, Ensho, and Kiyotaka—running through the narrow streets of Kyoto on the case! 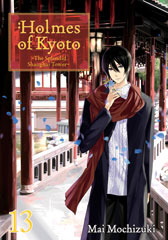 At Yilin Jing’s request, Kiyotaka goes to Shanghai with Ensho and Komatsu to appraise an art exhibition. What was supposed to be a comfortable trip takes a dramatic turn when Shiro Kikukawa suddenly sends him covert photos of Aoi in New York! Shiro tells Kiyotaka that if he wants to ensure Aoi’s safety, he has to steal a particular painting. To make matters worse, the man claims to have dirt on Seiji Yagashira. With Aoi’s well-being and his grandfather's reputation at stake, what will Kiyotaka do?