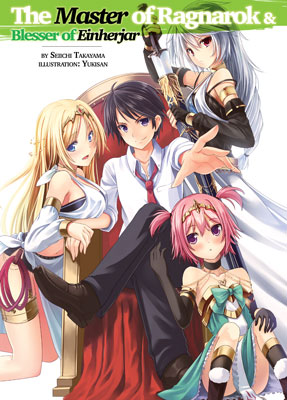 The Master of Ragnarok & Blesser of Einherjar

Some urban legends are best left untested! Yuuto Suoh gets more than he bargained for when he joins his childhood friend Mitsuki Shimoya in testing out an urban legend. When he uses his phone to take a picture of himself with the local shrine’s divine mirror, he is whisked off into another world – one heavily steeped in the lore of the old Norse myths. Using his knowledge gained from school and from his solar-powered smartphone, he has the chance to bring the Wolf Clan, the same people who cared for him, to prominence, all while earning the adoration of a group of magic-wielding warrior maidens known as the Einherjar. 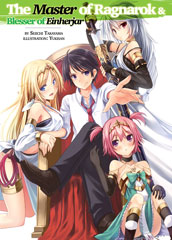 Some urban legends are best left untested! Yuuto Suoh gets more than he bargained for when he joins his childhood friend Mitsuki Shimoya in testing out an urban legend. When he uses his phone to take a picture of himself with the local shrine’s divine mirror, he is whisked off into another world – one heavily steeped in the lore of the old Norse myths. Using his knowledge gained from school and from his solar-powered smartphone, he has the chance to bring the Wolf Clan, the same people who cared for him, to prominence, all while earning the adoration of a group of magic-wielding warrior maidens known as the Einherjar. 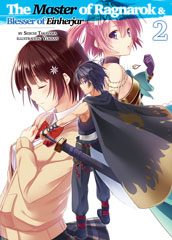 A storm of threats... and a hail of marriage proposals! With the defeat of the Hoof Clan's patriarch Yngvi, Yuuto Suoh has sent a shockwave through the power balance of Yggdrasil. Linnea proposes marriage to him, but he cannot hide his feelings for Mitsuki, who is waiting for him back in the modern world. In the midst of this dilemma, the young patriarch of the Lightning Clan Steinþórr suddenly appears during the victory celebration, leading to a touch-and-go confrontation with Yuuto. As the threat of war once again looms on the horizon, the twin princesses of the Claw Clan suddenly demand to become Yuuto's wives, as well?! 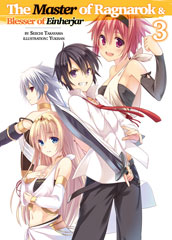 From weakest to strongest: A loser rises to become a sovereign! As the patriarch of the Wolf Clan, Yuuto is now a figure of undeniable power and authority. But the Yuuto who found himself transported to this world of Yggdrasil two years earlier was nothing more than an immature boy. He grew as a person thanks to those around him, such as the warrior maidens Felicia and Ingrid. And in particular, there was a reliable, older brother figure... In a world ruled by strength and the law of the jungle, just how did Yuuto come to be the sovereign ruler of the Wolf Clan? At last, the story will be told: The Master of Ragnarok's "Episode Zero"! 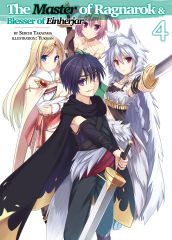 Cheat versus cheat!! A showdown between Yuuto and his sworn brother! As Yuuto continues to introduce reforms for the sake of the Wolf Clan’s future, he finally begins in earnest his search for a way back to Mitsuki in the modern era. When he visits a hot springs for a bit of rest and relaxation, Jörgen launches “Operation: Make Him Stay With a Honey Trap!” Yuuto is momentarily shaken, but maintains his firm resolve. But then the nomadic Panther Clan chooses that time to invade his clan’s sister nation, the Horn Clan. And leading the Panther Clan is the man who fled the Wolf Clan one year earlier: Yuuto's sworn older brother, Loptr! Will the conflicted Yuuto be able to raise an army against his family?! 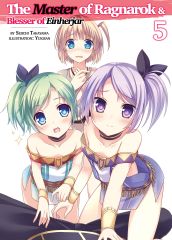 “Father, may I beg you for a favor?” It has been one month since the Panther Clan's invasion. Having repelled their army and returned to the Wolf Clan capital victorious, Yuuto enjoys a few moments of respite in the early days of winter, thanks to the warm kotatsu he's had specially prepared. But even times like these are far from uneventful. The twins Al and Kris attend a school and quickly stir up trouble; Sigrún departs on a mission to put down bandits in the countryside and encounters a new and powerful foe; and in the modern era, Mitsuki gains an unexpected clue to the mysteries of Yggdrasil... It's the fifth volume of the story of fantasy and military conquest that's garnering more and more attention! 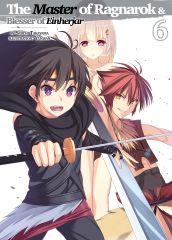 The Black Wolf versus the Wild Tiger!! The girl who suddenly appeared before Yuuto turns out to be none other than Sigrdrífa, the reigning divine empress of the land of Yggdrasil. Equally shocking for Yuuto is the fact that she bears an uncanny, twin-like resemblance to his childhood friend Mitsuki. As she is traveling incognito, Yuuto welcomes her to stay in the Wolf Clan palace for the time being, and he soon learns information from her that may hold the key to his returning home to the modern era. But just as Yuuto’s hopes are rising, the Lightning Clan attacks once again, led by the Battle-Hungry Tiger Steinþórr! Yuuto moves to intercept them with a new clever scheme, but...?! 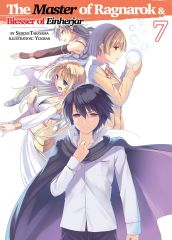 At last, Yuuto returns to the modern world. What fate awaits the Wolf Clan without its leader?! Due to Sigyn’s spell, Yuuto suddenly finds himself returned to the modern world he came from. Though he is joyous to reunite with the woman he loves most, his childhood friend Mitsuki, he is also fraught with worry over the “family” he left behind in Yggdrasil. Meanwhile, the Wolf Clan army falls into turmoil with Yuuto’s disappearance. As their enemy the Panther Clan takes advantage of this to launch a great assault, Felicia and the others confront them desperately, resolved to do-or-die! The time has come for Yuuto to make his most important decision in this 7th volume!! 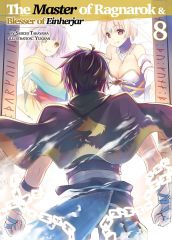 Mitsuki goes to Yggdrasil alone?! In order to protect his new family, the Wolf Clan, Yuuto has decided to return to Yggdrasil with Mitsuki, now his sworn partner for life. The two of them manage to deliver the news to their respective families, and at last the night of the summoning ritual arrives. However, something strange and unexpected occurs! Due to interference by Sigyn, the Panther Clan's master of magical arts, Mitsuki is sent to Yggdrasil by herself. The two lovers are once again separated across time and space; what fate awaits them? 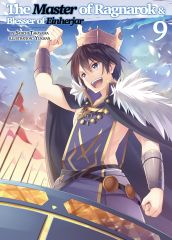 With Yuuto back in Yggdrasil, now it’s his turn to retaliate! At last, our hero has returned to Yggdrasil. Having turned Steinþórr’s army away with his “Empty Fortress” strategy, Yuuto sets out to attack and drive off the invading Panther Clan immediately. “I can’t afford to dawdle at a time like this.” Back from Japan with new tools and tactics in hand, it’s time for Yuuto to raise the banner of counterattack, in this intense whirlwind of a ninth volume!! 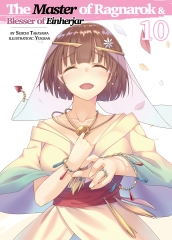 Yuuto gets married?! And at last, the veil is lifted from the mystery of Yggdrasil!! Time flows onward in Yggdrasil, and it is the height of summer. When Yuuto returns victoriously to his capital city of Gimlé, he is greeted by the fervent cheers of his citizens and the smile of his beloved Mitsuki. With the Panther Clan defeated, there is a brief time of peace, but no shortage of issues: How will Linnea fare against the rising food supply problems? What is the cause of Mitsuki’s spate of poor health? Elsewhere, the patriarchs of the Flame Clan and the Lightning Clan meet in a fearsome clash!! The world itself reaches a key turning point in this 10th volume. 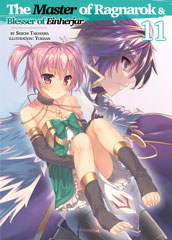 In the midst of Yuuto and Mitsuki’s wedding ceremony, everyone is shocked to learn of a new imperial decree, a subjugation order, declared under Divine Empress Rífa’s name, calling for the Steel Clan’s complete destruction. As unease spreads throughout Yuuto’s allied clans, Sword Clan patriarch Fagrahvél is steadily preparing his forces to surround and invade them from all sides. How will Yuuto manage to overcome an alliance led by the empire’s strongest? The oncoming drumbeats of war echo throughout the land once more in this eleventh volume! 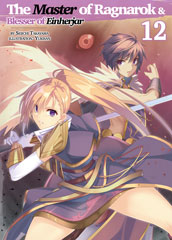 Following the decree of an imperial subjugation order against the Steel Clan, five major clans have joined together in an unprecedented military alliance. Fagrahvél, patriarch of the Sword Clan, commands the army invading from the east, and his forces total a staggering thirty thousand! With sheer numbers that outstrip even those of the Steel Clan, as well as a number of powerful einherjar fighting in his ranks, Fagrahvél attacks the eastern border fortress at Dauwe. Meanwhile, Yuuto is still in the middle of returning from Lightning Clan territory in the southwest... Faced with an invasion on a scale the likes of which he’s never faced before, can Yuuto come up with a strategy that will break through this crisis?! The popular isekai fantasy novel series continues in this battle-packed 12th volume! 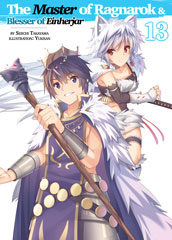 With his victory over the power of Fagrahvél's rune Gjallarhorn, the Call to War, Yuuto has forced the Anti-Steel Clan Alliance Army into retreat. Even as the cheers ring out commemorating this magnificent achievement, he does not let up in the slightest. With great decisiveness, Yuuto orders Sigrún and the Muspell Unit to pursue and destroy their chain of command. The young conqueror continues on his grand campaign, with Yggdrasil's fate in the balance, in this 13th spectacular volume of the ever-popular isekai fantasy series! 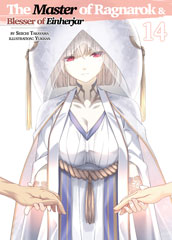 Having defeated the Anti-Steel Clan Alliance Army and freed Rífa from the clutches of Hárbarth, Yuuto immediately advances upon the Holy Capital of Glaðsheimr without regard for his army’s fatigue. For Yuuto, who has foreseen the complete destruction of Yggdrasil, marrying Rífa and gaining the title of þjóðann are things he must do at any cost. However, awaiting him there is a man who has not yet given up on his long-held ambitions. How will it all end? Find out in this shocking 14th volume of the ever-popular isekai fantasy series! 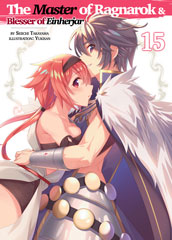 Hárbarth has finally been defeated—though at the cost of Rífa’s life. Yuuto, now faced with the imminent destruction of Yggdrasil, has no time to mourn and must move forward with his plans to save the continent’s people. As the new þjóðann, he has issued a decree mandating that all patriarchs fall under his banner. However, Oda Nobunaga, patriarch of the powerful Flame Clan, defiantly continues his march upon the Holy Capital... The epic battle between the two summoned patriarchs is about to begin! Can Yuuto’s cheat abilities defeat the legendary warlord of old? The final showdown between the two mighty leaders begins in this 15th volume!