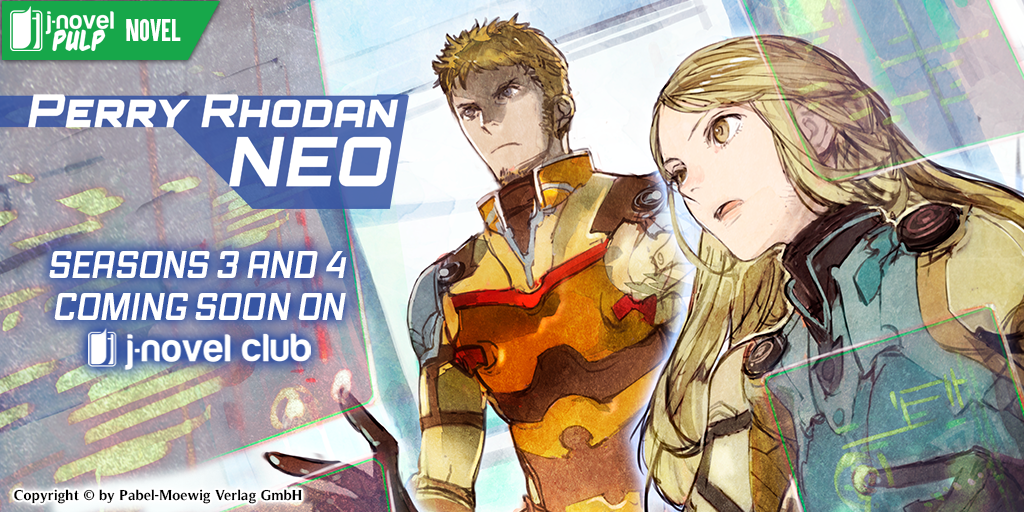 While you’re waiting for Season 3 of Perry Rhodan NEO to start, we had a chance to digitally sit down with Klaus N. Frick, editor-in-chief of all things Rhodan at Pabel-Moewig Verlag in Germany, and ask him a few questions about the series!

JNC: Perry Rhodan NEO is a reboot of an extremely long and beloved series. How was the idea to do the project formed, and what kinds of decisions faced the team when deciding how to refresh and modernize the characters and world?

KNF: We conducted a series of interviews and discovered that there were quite a few readers who, despite liking science fiction, felt a certain anxiety about trying to read Perry Rhodan. When we realized this, it gave us the idea of retelling the story of the moon landing and humanity’s first contact with extraterrestrials, but with today’s authors and conventions.

Of course, the whole thing was discussed for quite a long time internally. The sales department had to be convinced that there’d be an audience for it, but we had a strong vision of exactly when the series should start and in what form. Working on the creative ideas ran in parallel: we wanted to tell exciting stories which fit in with contemporary sci-fi without needing to retcon the classic adventures from the 1960’s.

We found ourselves guided to a small extent by American comic series, whereby there’s always a new version of “Batman” or “Spider-Man” which restarts the whole series.

JNC: NEO is split into “seasons” like a TV series rather than the grand “cycles” of the main series. Do you find that TV has had a large influence on the writing, e.g. in terms of the tempo, episode length, balancing the characters’ subplots, etc.? Was that all planned from the start, or did it shift in that direction organically?

KNF: It was intentional. Perry Rhodan NEO is a digest paperback [US readers: think the Archie comics or Reader’s Digest issues in supermarket checkout stands. -JNC] rather than a series of “short” magazines. [Since each installment is longer], we deliberately wanted to tell the story in smaller pieces. And in doing so, we get the similarities to a TV series: eight or ten episodes form a single story. You can read each episode as it comes out, or read them all together in one go.

In terms of length, we weren’t entirely sure of things at the start. We kicked off with eight episodes [per season] because it was convenient [to start one] four calendar months. Now we do ten episodes so that the numbering is clean and it’s easier for sales and marketing to convey.

[JNC Note: In Germany, the main Perry Rhodan series is published weekly as 64-page A5 magazines with dual-column text (roughly a sheet of letter folded in half) and stories span 50-100 weeks. Perry Rhodan NEO is published bi-weekly in 160-page digests. In terms of word count, each episode of NEO is roughly 1.5x the length of the classic series.]

JNC: Could you describe the planning process for us? For example, how often does the editorial team come together, and how much of each Episode is left to the individual author vs. assigned by the editors?

KNF: To give a rough idea, Rüdiger Schäfer and Rainer Schorm (the two authors responsible for the series’ outlines) meet regularly—by video during lockdown, of course—to plan out the story concepts. They also speak quite frequently on the phone, often multiple times a week. When they’ve finalized the concept for a season, they’ll discuss it with the editors—mostly over email. Usually, I’ll also discuss it with marketing in these early stages to see what opportunities it could present.

Once the conceptual plan is done, [Schäfer and Schorm] will begin writing outlines for the individual episodes. The actual authors, however, still maintain a great deal of influence on the story: while writing, they have plenty of opportunity to shape their Episodes as they see fit. The outline is just a framework; the most important work is done by the author.

Once the episode is done, it’s sent to us here at the publisher. If I’m happy with it, we sign it off and the editor gets to work. And so it repeats…

We do all try to meet up semi-regularly, but we haven’t been able to since 2019. We’re trying to have a conference soon with all the authors, the outline authors, and the editors. It all just depends—as with so many other companies and teams—on the current COVID situation.

JNC: NEO recently celebrated its 10th anniversary in Germany. What have been the biggest surprises in that time—either in the stories or the business side of things?

JNC: Do NEO and the classic series share the same audience, or is there a marked difference in the readership?

KNF: As far as we can tell—there hasn’t been any extensive research into the subject—the demographics largely overlap. That said, around half the [German] readership for Perry Rhodan NEO only reads NEO and not the classic series. We’re pretty sure of that because we analyze the responses we get and speak to readers a lot at events.

JNC: You’re regularly asked if there’s an update about a new Perry Rhodan film, TV series, or—as the readership becomes increasingly international—even an anime. The history of Rhodan adaptations is also quite long and complicated. Do you think it would be possible to make a quality adaptation, or has the Rhodan universe become so large that it would be impossible to make something that satisfies the audience?

KNF: I think it’s definitely possible to turn elements of the Perry Rhodan universe into some kind of [visual medium], whether that’s an anime series, live action television, or a feature film. There would have to be changes—film and television have different narrative requirements than written prose—but there are infinite elements to draw from and make stories out of.

The plots in Perry Rhodan NEO certainly lend themselves well to adaptation: the stories are emotional as well as cosmic, full of thrills, and set in an ever-changing variety of locales on Earth and in space.

JNC: For new readers who are unfamiliar with Perry Rhodan or NEO, please describe the series in seven words.

KNF: Oooh, that’s hard. Here are my two attempts (I think they’ll hold up in English):

Answers have been edited for clarity.