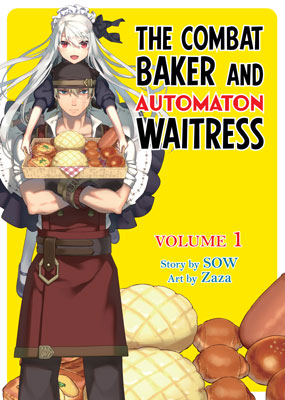 The Combat Baker and Automaton Waitress

The war hero known as Silver Wolf - Lud Langart - piloted a humanoid assault weapon while dreaming of life as a baker. After the war, Lud now peacefully runs a bakery, but, thanks to his frightening scowl, he can't sell a single loaf of bread. After posting an ad for a waitress in a last-ditch effort to save his business, who should reply but a beautiful, silver-haired, red-eyed young girl. What Lud doesn't know is that this new waitress was born from Avei, his AI partner installed in the weapon he piloted during the war. 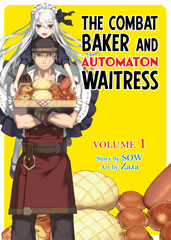 The war hero known as Silver Wolf - Lud Langart - piloted a humanoid assault weapon while dreaming of life as a baker. After the war, Lud now peacefully runs a bakery, but, thanks to his frightening scowl, he can't sell a single loaf of bread. After posting an ad for a waitress in a last-ditch effort to save his business, who should reply but a beautiful, silver-haired, red-eyed young girl. What Lud doesn't know is that this new waitress was born from Avei, his AI partner installed in the weapon he piloted during the war. 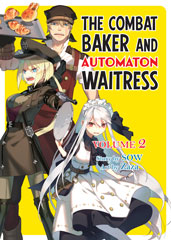 While business was stabilizing at Tockerbrot Bakery, its owner, Lud Langart, received a surprising invitation. A party was to be held on a large airship for the purpose of building a friendship between Wiltia and Pelfe. Sven persuaded the reluctant Lud to accept the invitation to bake for the party in order to increase his bakery’s popularity. However, political speculation and conspiracy mean danger is swirling behind the scenes. 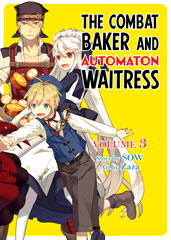 Sven and Jacob take a trip to a neighboring town to sell bread as part of a new sales strategy for the bakery. While there, Jacob has a surprising encounter, and soon after, major changes rock Tockerbrot. A rival bakery opens right next door, while the Schutzstaffel in Wiltia hatches a furtive plan... Get ready, Volume Three is bursting with excitement! 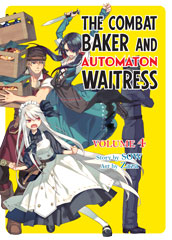 Lud is exhausted from Tockerbrot's booming business when he receives a request to bake savory breads for the Thanksgiving festival. Meanwhile, Hildegard of the Schutzstaffel and a covert operative called the Wolf Man come to Organbaelz to assassinate Lud. But Sven easily sees through Hilde's disguise and the two ne'er-do-wells are captured. Then Lud asks the Wolf Man if he knows how to bake bread... 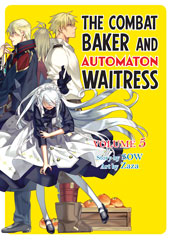 Lieutenant General Genitz of the Wiltian Schutzstaffel finally reveals himself to be the enemy--and he steals Sven away from Lud's side! In Berun, the royal capital, even Sophia becomes a prisoner, and the Weapons Development Bureau falls into the hands of the Schutzstaffel. In a tighter pinch than ever before, can Lud overcome his horrible past and, together with its lovable star waitress, reopen his bakery Tockerbrot?! 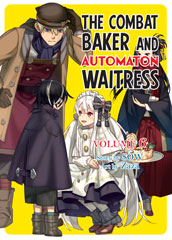 At the end of the year, the town of Organbaelz holds a Holy Festival to praise the Saint of Europea. It's said that, on the night of the festival, the Saint comes to hand out presents to good children and the Devil comes to take away bad children--and Sven and Lud are going to disguise themselves for these roles! This volume contains the story of the Holy Festival for which the two are bustling about baking new sweets and donning costumes. Also contained within is a story revealing the secrets surrounding Daian Fortuner, a.k.a. the Sorcerer, and a story about Hilde, who has enlisted in an officer's school known as the Preparatory School for Young Ladies. Volume 6 in this popular series revolves around these three stories and the characters after the Genitz's rebellion! 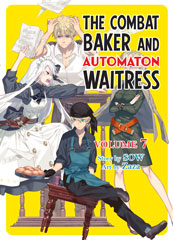 One day, Sven returns to Tockerbrot Bakery to find a robber has holed up inside with hostages! Lud—and Sven, after she plunges in—are able to resolve the crisis, but it marks the beginning of a string of unfortunate events. A group of citizens begins protesting outside the shop, clamoring for justice and drastically hurting Tockerbrot's customer flow. Later, when Lud appears in court as a witness, his actions during the war fall under scrutiny. To make matters worse, Mary—a woman Lud believed to be dead—has returned to haunt him yet again with ghosts from his past. What can Sven do to stop her Master from giving up on life as a baker?! 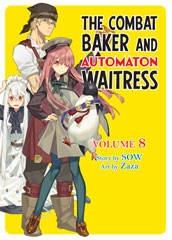 One day, a mysterious man named Meitzer appears at Tockerbrot Bakery. He claims to be Sven's father, but she's an automaton, so she can't possibly have any blood relatives... In the royal capital, Sophia and Hilde welcome a baffling general from the nation of Noa on the new continent. Meanwhile, Daian sneaks into the rival nation of August with Blitzdonner to examine a certain relic. Eventually, these separate events in different places intersect, leading to an astounding conclusion of even bigger proportions. 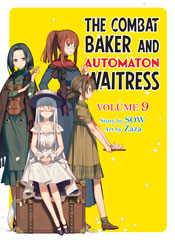 Lud finds out Sven is an automaton when mechanical soldiers targeting Meitzer attack Organbaelz. But before they can come to grips with this new situation, Daian and Blitzdonner appear out of thin air, throwing Tockerbrot into even greater confusion. Usually, Jacob would be there to calm everyone down, but the sudden appearance of his father causes him to make himself scarce. One year since Sven became the bakery's popular waitress, she and Lud are finally beginning to work out their misunderstanding. But as the Saint sows disorder behind the scenes, their future is still uncertain... 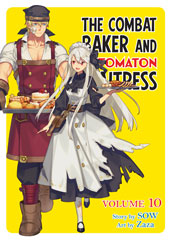 Everyone celebrated Lud and Sven’s wedding with them. However, human and machine lifespans are vastly different, so Sven decides to become human. Meitzer knows how to accomplish this, so she goes to meet him, but he has been abducted by the Security Department. Lud and company take action to rescue Meitzer and find themselves caught up in the Saint’s schemes to start another Great War. However, they’re no longer a war hero and a weapon—they're just a normal baker and a popular waitress. This record of an eventful small-town bakery reaches its moving finale!